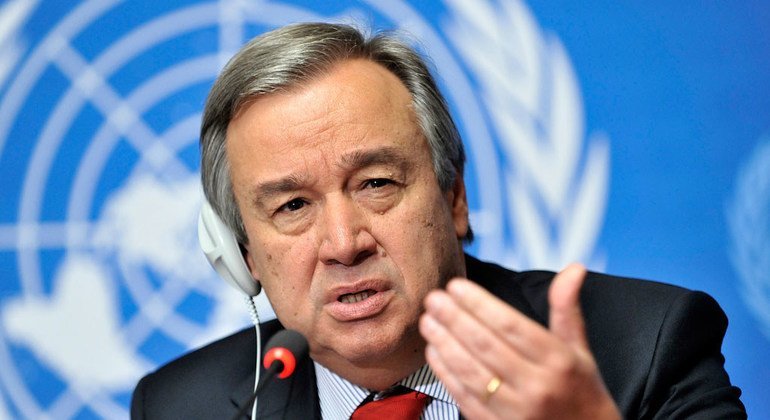 Guterres is visiting Moscow and is then scheduled to visit the Ukrainian capital, Kyiv, later this week.

Guterres said he wanted to reduce the impact of fighting in Ukraine on food security in other parts of the world. Lavrov said they would discuss “the situation around Ukraine that acts as a catalyst for a great number of problems which had piled up over recent decades in the Euro-Atlantic region.”

Guterres also told the Russian foreign minister that he is ready to fully mobilize the organization’s resources to save lives and evacuate people from the besieged Ukrainian city of Mariupol.

“Thousands of civilians are in dire need of lifesaving humanitarian assistance, and many have evacuated,” Guterres told a news conference with Lavrov.

“The U.N. is ready to fully mobilise its human and logistical resources to help save lives in Mariupol”, he said, proposing coordinated work with the Red Cross to allow those holed up inside the Azovstal steel plant in Mariupol to leave.

Speaking about reports of possible war crimes in Ukraine, Guterres said he was concerned, and that they required an independent investigation.

He was later due to meet Russian President Vladimir Putin.

Lavrov, for his part, said Russia was committed to a diplomatic solution via talks on Ukraine. Dismissing Kyiv’s proposal to hold peace talks in the Ukrainian port city of Mariupol, Lavrov said it was too early to talk about who would mediate any negotiations.

Moscow is ready to cooperate with the United Nations to help civilians in Ukraine, where Russia has been conducting a military operation for over two months, Lavrov said.

Ukraine’ Foreign Minister Dmytro Kuleba said while a diplomatic breakthrough was unlikely, there was hope Guterres could help the humanitarian situation, esepecially around Mariupol, where Ukraine says hundreds of civilians are trapped with the city’s last defenders inside a blockaded steel works.

“I don’t think (the) Secretary General will be able to end the war. But there is one crucially important path that he can implement: It’s to arrange a green corridor for defenders and civilians blocked by Russia in Mariupol.”

Kyiv and its allies played down Lavrov’s remarks about nuclear war. Russia had lost its “last hope to scare the world off supporting Ukraine,” Kuleba tweeted after Lavrov’s interview. “This only means Moscow senses defeat.”

The U.N. refugee agency is launching a new appeal for funds for the crisis sparked by the war in Ukraine that projects up to 8.3 million people will have to flee the country by year-end.

The projection was announced Tuesday as part of a new $1.85 billion regional response plan from the United Nations High Commissioner for Refugees (UNHCR) aimed at supporting refugees from Ukraine after Russia’s war began on Feb. 24. It far outstrips the agency’s previous refugee estimates, which now stand at just over 5.2 million.

The exodus has exceeded the worst-case predictions of the Geneva-based agency, which it has called the largest refugee crisis in Europe since World War II.

The response plan would help refugees who have fled to neighboring countries including Hungary, Moldova, Poland, Romania and Slovakia, but also other countries in the region, including Belarus, Bulgaria and the Czech Republic.