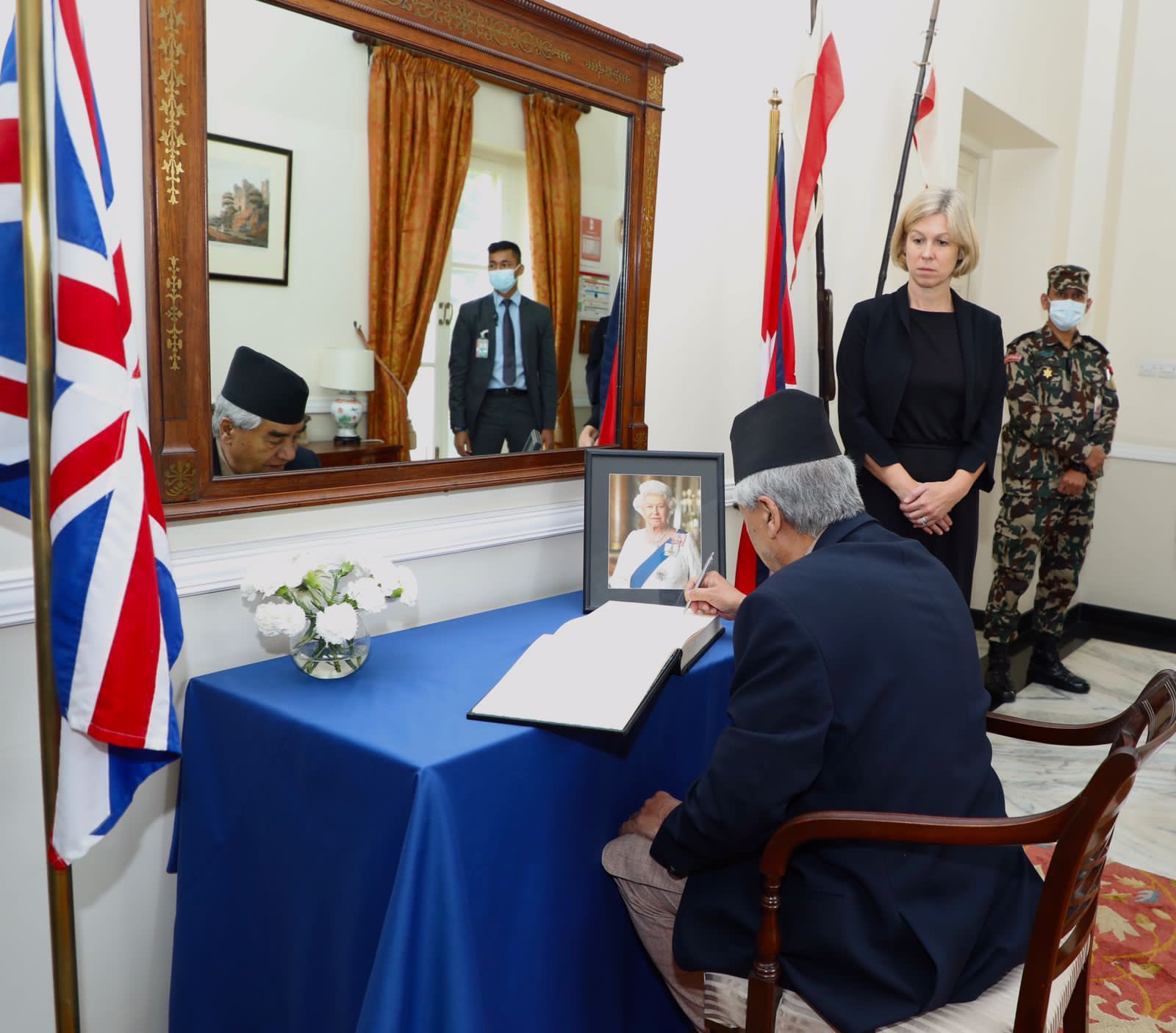 Kathmandu —Nepal’s Council of Ministers on Friday evening has announced three days of national mourning over the demise of Queen Elizabeth II who took her last breath on Thursday.

The government of Nepal expressed deep sorrow over the demise of Queen Elizabeth II and wished for eternal peace for the departed soul. Also, the meeting announced to fly the national flag at half-mast in government offices and Nepali embassies and missions abroad for three days (September 10-12) to mourn the demise of Elizabeth II.

President of Nepal, Bidya Devi Bhandari and Foreign Minister Dr Narayan Khadka also visited the British Embassy in Kathmandu on Friday to sign the book of condolence on the passing away of Queen Elizabeth II.

Writing a message in the condolence book, the President extended heartfelt condolences to King Charles III, the Royal Family and the friendly Government and people of the United Kingdom. The President stated that the late Queen was a devoted and compassionate guardian for the United Kingdom and for Nepal she was a great well-wisher.

“President also sent today a message of condolence to His Majesty King Charles III of the United Kingdom. In her message, the President stated that this tragedy has stunned not only the United Kingdom but also the people around the world who knew the late Queen as a caring leader and a great human being. The President also stated that the late Queen’s rich legacy of public service would be remembered for years to come,” a release from Nepal’s Ministry of Foreign Affairs stated.

Recalling the State Visits of Queen Elizabeth to Nepal in 1961 and 1986, the President mentioned that the late Queen’s contribution to strengthening the bond of the Nepal-UK relationship was immense.

Likewise, in his condolence message to Elizabeth Truss MP, Prime Minister of the United Kingdom, Prime Minister Sher Bahadur Deuba also paid tribute to the late Queen as a respected world leader who distinguished herself with duty, honour and service to the nation and humanity.

“Recalling the contributions made by the late Queen to the strengthening of Nepal-UK relations and her close connection with Nepal represented by her two State Visits, Rt. Hon. Prime Minister stated that in her passing away, Nepal has lost a great admirer and friend,” the release further added.

Separately, Minister for Foreign Affairs Dr Narayan Khadka has also sent a message of condolence to James Cleverly MP, Secretary of State for Foreign, Commonwealth and Development Affairs of the United Kingdom, expressing profound sorrow on the demise of Queen Elizabeth II. ( Agencies )