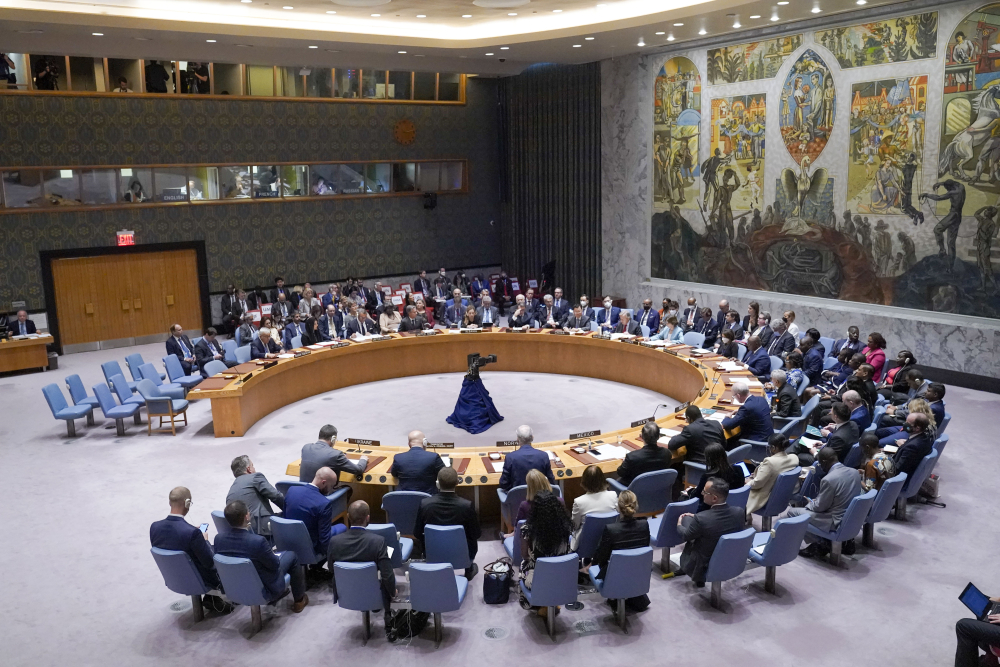 “Every council member should send a clear message that these reckless nuclear threats must stop immediately,” U.S. Secretary of State Antony Blinken told a special session of the council’s foreign ministers held on the sidelines of the General Assembly’s annual gathering.

“This is a war of annexation. A war of conquest,” Britain’s new Foreign Secretary James Cleverly said, “to which President Putin now wants to send even more of Russia’s young men and women, making peace even less likely.”

Putin announced Wednesday that he is calling up 300,000 more troops for his “special military operation” in Ukraine.

“Yesterday, Putin announced mobilization. But what he really announced before the whole world was his defeat,” Ukrainian Foreign Minister Dmytro Kuleba said. “You can draft 300,000 or 500,000 people, but he will never win this war. Today, every Ukrainian is a weapon, ready to defend Ukraine and the principles enshrined in the U.N. Charter.”

The Russian president has also announced plans to hold referenda in four occupied parts of Ukraine in an apparent attempt to annex them.

“It is an attempt to change internationally recognized borders by use of force — and no sham referendums can change that basic fact,” Ireland’s Foreign Affairs and Defense Minister Simon Coveney said. “It cannot be allowed to stand.”

Secretary-General Antonio Guterres told the council that the latest developments are “dangerous and disturbing.”

“The idea of nuclear conflict, once unthinkable, has become a subject of debate,” he said. “This in itself is totally unacceptable.”

Even Russia’s allies expressed their growing unease with the war’s direction.

“The trajectory of the Ukraine conflict is a matter of profound concern for the entire international community,” Indian Foreign Minister Subrahmanyam Jaishankar said. “The future outlook appears even more disturbing. The nuclear issue is a particular anxiety.”

“Include reasonable concerns into negotiations and put feasible options on the table so that talks can produce results and bring about peace,” Wang Yi said. He also urged the parties to “exercise restraint and avoid escalating tensions.”

Russian Foreign Minister Sergey Lavrov did not listen to the criticism of his counterparts, leaving his deputy and a junior ambassador to fill his seat during most of the three-hour meeting. He showed up only to deliver his remarks.

Lavrov did not address the military mobilization or Putin’s latest nuclear threats. Of the referenda, he said they are the consequence of “Russo-phobic” statements by Ukrainian President Volodymyr Zelenskyy, who he said told people who feel they are Russian to go to Russia.

“I think the decisions that have been adopted by a whole range of regions of Ukraine about conducting referendums are the result of his advice,” Lavrov said of the planned votes in the south and east of Ukraine.

“We have no doubt that Ukraine has become a completely totalitarian, Nazi-like state where the norms of international humanitarian law are trampled on,” he added.

Thursday’s meeting was originally called to discuss the atrocities that have come to light in Ukrainian cities after Russian troop withdrawals.

Mass graves have been found in several cities, including Bucha, Irpin, Mariupol and most recently Izium.

In April, Russian troops were driven out of Bucha, leading to the discovery of mass graves with hundreds of bodies.

Lavrov told council members that Bucha was a “propaganda operation,” and there is “no doubt in anyone’s mind” that it was staged.

“When I went to Bucha and went behind St. Andrews Church, the bodies I saw were not fake,” he told the council.

In May, the ICC deployed teams of investigators to the country. He said the picture is troubling.

“One has seen a variety of destruction, of suffering and harm that fortifies my determination and my previous finding that there are reasonable grounds to believe the crimes within the jurisdiction of the court have been committed,” he said.

“Morally and politically, Russia has already lost the war,” European Union foreign policy chief Josep Borrell told the council. “And increasingly, it is losing on the battlefield, as well. Ukraine will prevail.”

“These numbers will increase as we de-occupy towns and cities in the east and south of the country and new crimes are revealed,” Andriy Kostin said.

In his video speech to the General Assembly on Wednesday, Zelenskyy called for a special tribunal to be established to punish Russia and demanded financial compensation for the destruction its invasion has caused.

In March, the International Court of Justice ruled that Russia had wrongfully claimed a genocide in Ukraine to justify its invasion and ordered it to suspend its military operation. Russia has rejected the court’s jurisdiction.

The U.N. General Assembly also overwhelmingly demanded on March 2 that Russia immediately and unconditionally stop its military operations and withdraw its troops from the internationally recognized borders of Ukraine.

At the Security Council, Mexico’s foreign minister offered a proposal from his president to form a committee of nations to support U.N. mediation efforts to end the war. Marcelo Ebrard Casaubon said it would include several leaders, including Indian Prime Minister Narendra Modi and Pope Francis.

“The objective would be very clear: generating new mechanisms for dialogue and creating additional spaces for mediation that foster trust, reduce tensions and open the path to lasting peace,” he said.

After the council meeting, Ukraine’s foreign minister said he would discuss the proposal with Ebrard at a meeting later in the day. ( From : VOA)