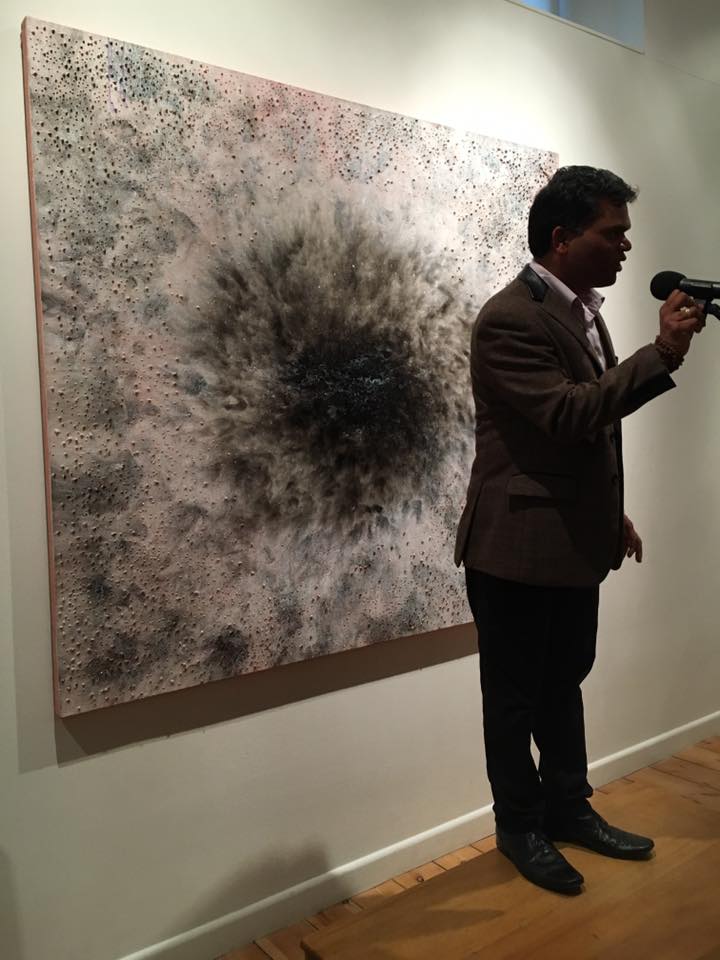 London – The October Gallery based in London is organising the fourth solo exhibition by a well-known Nepali artist based in the UK, Govinda Sah ‘Azad.’  Entitled ‘Absent Presence, the exhibition brings together a new body of large-scale and smaller paintings rendered in oil and acrylic on linen and canvas. Theworks are informed by Sah’s intriguing combination of insights into his local environment and his ongoing metaphysical musings about the nature of reality itself.

While studying at the College of Fine Arts in Kathmandu, Sah first become aware of the work of the English artists,J. M. W. Turner, and John Constable. While the latter amazed him with his ‘cloud studies’, it was the manner in which the former represented light in all its various manifestations that most fascinated Sah. Further studies, at Wimbledon College of Art, brought him to London, in 2008, before a later move to Margate introduced him to the Kentish seacoast where Turner himself had thrilled to discover that unique quality of light that suffuses so many of his later paintings. Today, Sah lives and works in Margate.

Describing his ongoing journey, Sah said, ‘Originally, in Kathamandu, I worked in a realist mode, before gradually moving towards abstraction, in London, where clouds became a subject that allowed me to meditate upon the more spiritual aspects of Nature. Margate, being more open, means I often work outside, where the change in the colour of light is more profound. One immediate consequence is that although my colour palette becomes simpler, my paintings feel much brighter. It’s a challenge to capture these fleeting, almost transcendental effects, that are so difficult to hold onto, but that necessity forces my work to keep on developing, which delights any artist!’

Sah’s work is composed of densely interwoven layers of mark-making, using oil and acrylic in what Sah describes as a ‘long unfolding conversation between the artist and his canvas.’The painting ‘replies’ by proposing new areas for consideration and further exploration of the process continues until a successful balance point is reached. In this way, works like

AbsencePresence become an example of a ‘logovisual’ approach to grappling with the conundrums that beset all of us; the painting grew out of isolation and the artist’s feelings of separation from his distant family during ‘lockdown’.

Says Sah, ‘The more I thought about my family, the more I became aware of their constant presence in my daily life. The “problem”only exists because of my own unreal expectations, my fixed projection of the world. By teasing it apart, deconstructing it and reconfiguring it afresh, I realised a much deeper truth: that I cannot be ‘apart’ from my mother or my family, we are always connected and can never be separated from each other, not even by distance.’

Each one of Sah’s captivating works is a record of similar ruminations on the complex enigmas of life. Each canvas bears witness to a struggle: each stand as testimony to its own resolution. Although Man feels that he is apart from Nature, these startling canvases reconfigure this puzzle to reveal another perspective, concluding that man is a part ofNature. Herein lies the simplicity and endless allure of Govinda Sah’s work, said a press release issued by the October Gallery.

Mr Sah’s art works will also be on display at the Abudhabi Art Fair from 16th November 2022, the Gallery said.