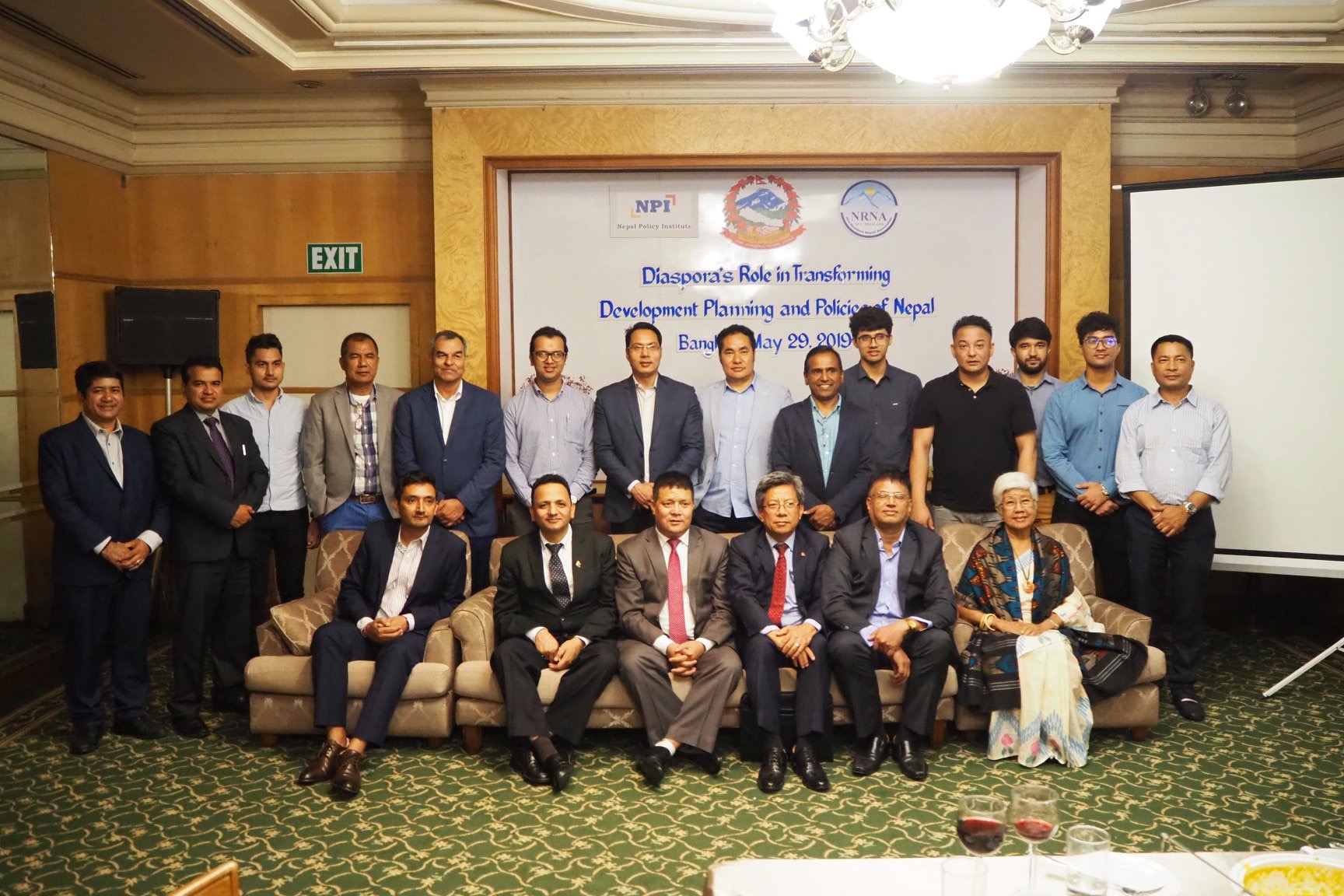 The program was organized as a follow up event of previous meeting between NPI and NPC held on 29th March in Bangkok in the process of developing approach paper of 15thPeriodic Plan and 25 year long-term vision of Nepal. Another objective of the event was to identify the role of diaspora in the policy and planning for the sustainable socioeconomic development of Nepal.

NPI is an autonomous global think-tank promoted by NRNA Global. The concept of NPI was conceived through ‘NRNA Vision 2020 and Beyond’ which was endorsed by NRNA International General Assembly on October 2017. NPI came into operation in public sphere since October 2018 unveiling its founding strategic plan at 1st NRN Global Knowledge Conference held in Kathmandu. 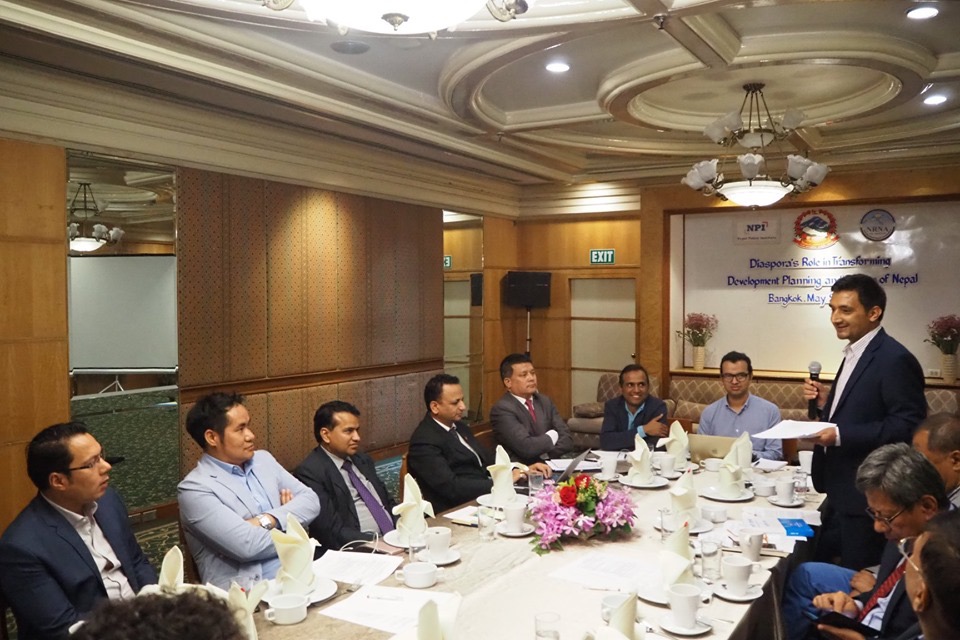 Addressing the program NPC member Min Bahadur Shahi proposed for a comprehensive MOU between NPC and NPI to bring the collaboration to next height. Shahi informed that NPI’s several recommendations on 15th periodic plan and long-term vision are incorporated in the approach paper published by NPC.

The published book detailing the finalized approach paper was handed by NPC team to NPI Chair during the program. Shahi appreciated the critical perspectives in NPI’s recommendations to transform the planning and policies in the changed political environment in Nepal. Shahi said NPC is firm in critical engagement of multiple stakeholders to develop good policies for which NPI has proven to be one important stakeholder already.

Without adequate FDI the Nepal cannot achieve its targets said Chair Dhakal.  He explained that Nepal should forthwith get rid of all restrictive investment measures making Nepal the most attractive destination of investment in the world. This is unlikely without abolishing restrictions on foreign direct investments, and advocacy in investments opportunities at international business arena, particularly establishing on supply chain, innovation and technology Dhakal elaborated. There is no alternative to welcoming FDI to SMEs in a condition they bring new technologies and create employment opportunities to Nepali individuals to create more vibrant economic activities and competitiveness. Dhakal shared the experience of Thailand that there is no minimum threshold for foreigners for investment giving a clear path to invest in SMEs. They just require 4 Thais employment for providing 1work permit for foreigner Dhakal explained.

Talking about poverty eradication, Chair Dhakal questioned what specific efforts and plans are contemplated to raise extreme poverty level from US$ 1.90 day to reach Lower Middle-Income level of US$ 3.20 day (World Bank) in the upcoming planning cycle while Nepal is planning to graduate from LDC soon. Dhakal was of the opinion that the mere focus on annualized growth will not ensure sustainable Lower Middle-Income level of all citizens.  He insisted on  bridgingthe income disparity gaps through raising income level of citizens who are at the lower margin of economic strata;otherwise, development will be trapped within the confines of a small middle class that dominates Nepal’s economic environment and social disparity will widen further.  Dhakalurged NPC that Nepal has to learn the lessons from the experience of Brazil, the Philippines and India where economy is getting trapped within the limits of middle-incomegroup creating unexpected social exclusion.

Next point Dhakal raised was on the environment issues. He drew attention of the government of Nepal towardsdeteriorating situation of environment in Kathmandu valley including air pollution, soil erosion, depleting underground water and prone to high intensive earthquakes. He recommended to conduct research to see whether we can relocate the capital. He shared an idea of planning for seperatecultural capital, administrative capital and business capital in different cities of Nepal to tackle the crowded Kathamandu. Dhakal had presented the cases of relocating capitals inMyanmar, Indonesia, Brazil and others.

Another point Dhakal made in his presentation was about to human capital development.. Dhakal, Also the Specialist of King Mongkut’s University of Technology in Bangkok, said without developing human resources needed for the country, Nepal cannot achieve its ambitious plan of building  prosperous Nepal and Happy Nepali. He suggested to opencommunity colleges in cooperation with local governments to tackle the unique and local needs of each parts of the country. With a provision of earning certificate, diploma and a route to upgrade to degree programs should be created so that local and national needs can be attained Dhakal said. Re-structuring of higher education institutions with autonomy in governance and enforcement of independent quality assurance framework can do well to achive this target Dhakal suggested. In his opinion, the government of Nepal can also make an complementary scheme to engage diaspora Nepali expertstowards developing human resources.

The last issue Dhakal raised in his presentation was about the need of redefining of Nepal’s economic diplomacy where embassies should be innovative and tapped all possibilities mobilizing the diasporas to tap tourism and trade potentials.Cultural, adventurous, religious and luxury tourism have potentials in Nepal. Trade deficit in Nepal is very alarming and NPI would like to know what Nepal is planning towards the ongoing trade tensions between the USA and China and other superpowers of technology questioned Dhakal. Nepal cannot think of itself  in this globalized era but needs to move forward establishing international Supply Chain, innovation and technology to survive such changes.

Another step to take in tackling trade deficit creating food security policy and plans and creating incentives to farmersrather than punishing them for leaving unused land.

While highlighting these 5 points, Dhakal iterated that government may reflect BPMM (Build, Produce and Manage, and Monitoring) theme, which NPI had recommended earlier, in its annual planning  and budget, periodic plans and long term vision. NPI is keenly waiting ifthis theme would be reflected in such important development planning of the nation said Dhakal. He also assured that NPI would offer innovative perspectives which are beyond the ones NPC can get from regular consultancies and the peer reviewed journals/ proceedings of academic conferences. Its recommendations might sound little critical but that’s the nature of innovative perspectives. Until there are early adopters emerge, innovative ideas get ignored and overlooked by the policy reformers said Dhakal.  Challenging the orthodoxy will be a characteristic of a think tank which is what NPI is trying and aiming to have added Dhakal.

Speaking at the same program NPC Joint Secretary Toya Nath Gyawali presented social security, FDI, economic diplomacy, and risk mitigation scheme after Nepal graduates from LDC will be the major areas to engagement between NPC with NPI.  Government can even save huge cost engaging NPI instead of consulting with foreign forms. He also said that since NPI experts understand the context of Nepal better NPI’s policy recommendations more realistic than from other international forms.

NPI Focal Point NPC Dr. Narayan Poudel had presented about the details of the collaboration between NPI and NPC for almost a year now. Dr. Poudel applauded the contribution of NPI for FDI policy and 15th Periodic Plan were greatly appreciated by many sections of Government of Nepal and many recommendations are already incorporated. Some of them will be considered in the future policy reform as well said Poudel. Since last November NPC has assigned Poudel as the focal person for NPI in the coordination of Foreign Ministry of Nepal.

After the key speeches, NPI Research Coordinator, Prof Bishwa Nath Tiwari adviced government to start preparing to handle the post LDC graduation situation as Nepal will loosea lot of privileges it is getting now as LDC. Prof Tiwari had conducted the moderated interaction on the theme ‘Diaspora’s role in transforming the development planning and policies of Nepal’. 22 participants from diverge areas of expertise had shared their comments and recommendations. The interactions raised the concerns about corruption, governance, FDI, tourism, trade, diaspora engagement, quality assurance and autonymy to the governance of universities. All the concerns and the suggestions were noted and NPC Member Shahi had responded during his address while wrapping of the interaction.

Acting Ambassador to Thailand Janga Bahadur Gurung and NRNA Thailand President Assajita Awale had given welcome remarks to the event. Ambassador Gurung thanked NPI for creating a forum through which diaspora expertise resources can be utilized for the development of Nepal. Similarly, NRNA Thailand President Awale said due to the nature of Nepali community in Thailand their focus will be mostly on Knowledge skill and innovation transfer to Nepal and assist in promoting Nepal’s economic diplomacy. Awale requested the NPC to implement the outcome of the interaction in the planning and policy making process.

At the same program, a group of Nepali scholars from King Mongkut’s University of Technology North Bangkok also presented the youth perspectives in planning and policy reform in Nepal. They draw the attention of NPC that Artificial Intelligence (AI) is taking toll in many areas of workand questioned that how Nepal is responding to such changing landscape of future workforce. They also advised NPC not only to plan but to implement as well. They also asked whether NPC has thought of creating opportunities for Nepal graduates abroad.